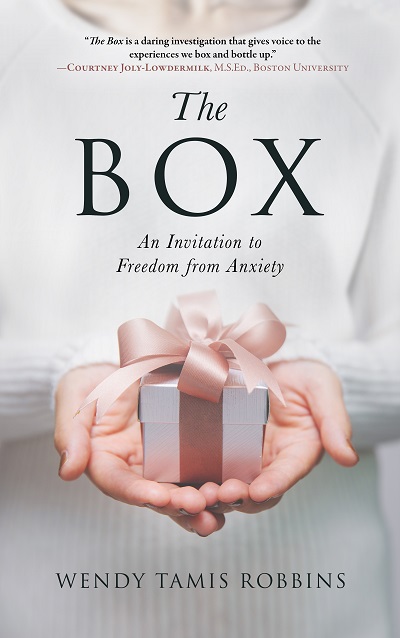 When you put down a copy of attorney and author Wendy Robbins’ new book The Box: An Invitation to Freedom from Anxiety, all you can do as a reasonable human being is think of one word. Bravo. Not, however, a ‘bravo’ for her managing – in spite of considerable and sometimes seemingly insurmountable challenges – to become a decorated athlete, Dartmouth College and eventual law school graduate, and experienced attorney. No, bravo for her regardless of all those things still being here. For having made it. Her story, at its core, is everyone’s story. We all suffer from illness.

We all suffer at times with a feeling we are the only one with the attributes we dare not share with others. And we all at times need a little help, as Robbins brilliantly demonstrates in The Box’s pages through her own, vividly resurrected odyssey. Now, in a position of ultimate privilege, she’s paying it back by sharing the profundities of her story in the most public, commercialized way possible. In an era when words such as ‘out of touch’, ‘jump the shark’, and ‘tone-deaf’ are applied to the overtly successful, it’s refreshing to see Robbins as an example of someone breaking this formula.

Mental health remains one of the biggest boogeymen in public discourse. Something that in spite of various accolades and awards to organizations’ attempts to normalize it is informally an out of sight, out of mind issue. There is still so much hate and scorn for anyone openly admitting their intrapsychic vulnerabilities and weaknesses, making it all the more brave and charitable that someone in Robbins’ position chooses to do so. A press release for the book characterizes it as ‘a powerful portrait of a woman who refused to remain caged in a box of her making’. Few words are more evocative and powerful about the universal tenets of Robbins’ story.

A particularly powerful passage of Robbins’ book articulates the semi-metaphorical presence of the little girl and the Wizard. In timeless format, both represent facets of her persona – a manifestation of something serving as ambassador for power, unattainability, and maybe even aspiration. The little girl more obvious, a powerful reminder of the child within that Robbins still needed to grapple with, that she still needed to utilize the power of simultaneously to reach a point of certain, undeniable inevitability. As she characterizes such a revelation in the read, “What was I missing? What did this mean?…It was me. I knew in that moment the voice I’d been hearing since I was a child was hers…‘What are you doing?’ I asked. ‘No questions. I’m in control here,’ she replied, still looking forward. ‘Why do you need to be in control?’ ‘Because I’m…’ she paused. ‘I’m terrified…’”

Through such candid yet effectively dramatic prose, Robbins proves herself not only an even-handed literary force but also a master storyteller. You can feel the pain searing through the passages aptly describing the phenomena she endured for years, making someone in her position speaking openly about mental health not only intellectually comprehensible but emotionally understandable as well. In fact, the emotionality coming across so beautifully really is key to The Box’s success. So many books on mental health at best are a little high-handed or preachy, at worst ironically dehumanizing of their subjects. There’s a feeling of being the person watching a car accident happen, a sort of hierarchal complicity in otherizing what are very human, very relatable problems in spite of appearances. But Robbins has too much style to let that happen, and in this case that’s a very good thing.