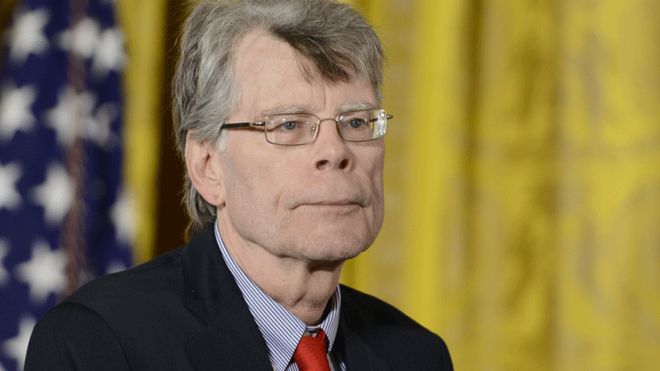 Novelist Stephen King has quit Facebook, saying he was uncomfortable with the “flood of false information allowed in its political advertising”.

He also said he was not confident the social network was protecting “users’ privacy”.

He made the announcement on Twitter, where he has 5.6 million followers.

Mr King’s tweet, which had been liked more than 250,000 times at the time of writing, added that users could continue to follow him and his dog Molly on Twitter.

Actor Jim Carrey, who left in 2018, also sold his Facebook stock, citing the fact that the firm had profited from Russian interference in the 2016 US election.

Facebook’s decision not to change the way it fact-checked political adverts has proved controversial with many.

It has argued that it is not right for private companies to censor politicians and called for government regulation to deal with the issue.

By contrast, Twitter announced in October that it would ban all political advertising, with founder Jack Dorsey saying that it was not possible to be working to stop the spread of information while at the same time allowing someone who had paid the platform to “say whatever they want”. 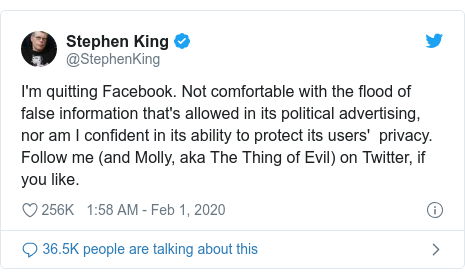 It is estimated that US political parties will spend about $6bn (£4.6bn) on advertising in the run-up to the 2020 elections. According to research firm Kantar about 20% of this will be digital.

Facebook has said that political adverts are not a major revenue stream for it – less than 0.5% according to founder Mark Zuckerberg.

However, the firm has faced pressure to change its mind – Hillary Clinton was among politicians to praise Twitter’s decision and ask Facebook why it was not doing the same.

After the UK’s recent general election, the Coalition for Reform in Political Advertising said that there had been a flood of fake news and disinformation.