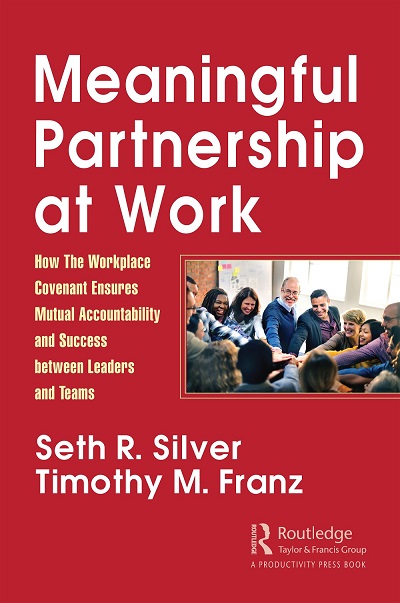 “All of us work with others. Sometimes those professional relationships are important enough that we call them a ‘partnership’,” write Seth R. Silver and Timothy M. Franz in their new book, entitled Meaningful Partnership at Work. They go on to elaborate, “…what does partnership in the workplace really mean? What makes some of our partnerships exceptional while many are mediocre, frustrating or even a disaster? And why do these work partnerships matter so profoundly to our well-being and success, regardless of our level or role?” So begins one of the most comprehensive and well-researched books on this subject I’ve read all year. What’s so enjoyable about Meaningful Partnership is its distinctive clarity.

There’s never a sense the authors are out to fool you, or are presenting their concepts – christened under the banner ‘Workplace Covenant’ – in purposefully dense or intellectually exclusive prose. If anything, it’s just the opposite. Silver and Franz count on their audience being informed, but with that caveat aside provide an A to Z set of descriptions solidifying what they believe is an inherently symbiotic rapport shared between so-called ‘boss’ and so-called ‘employee(s)’. “…imagine the following. You are in a canoe, on a calm quiet lake. Imagine you are with another person,” Silver and Franz write. “One of you is up front, the other in the back. One is paddling on the left, the other on the right. Both of you dip your paddles into the water, then take long smooth strokes.

Without speaking, you are paddling in sync, matching the force of the other’s stroke, pushing the water hard behind you. Both in tune with the other’s timing and skill. Even your breathing is synchronized. As you dip, stroke, and lift, and then repeat, the canoe is gliding forward swiftly and gracefully. The collaboration is exhilarating yet comforting.” Such a generalization perfectly encapsulates the specified statistics and examples that follow, making the book have the structural clarity of a position paper rather than the pitfalls of a theoretically meandering, typical nonfiction read.

Everything holds together because of what Silver and Franz aren’t afraid to implement stylistically. They sample multiple tonal qualities belonging to a chameleonic range of literary genres, which along with the ultramodernist corporate and entrepreneurial philosophies they promote add to the book’s non-intellectual appeal. More and more there’s a humanization factor that’s entering the workplace itself, workplace discourse, and overall workplace attitude and widespread representation.

While in Silver and Franz’s discourse the term might be ‘Workplace Covenant’, for others it might come in the form of implementing aspects of Toyota’s Lean system. Or, perhaps, initiating the Inclusion Rider a la the statistical research of the Annenberg Inclusion Initiative. The idea of humility no longer conflicts with the idea of industry, and it’s that distinguishable trait popping up in the last few years that has broken so much ground and flattened so many barriers. The time is now to implement solid relationships, Silver and Franz argue. There is no longer a dividing line between how one conducts themselves in the public square, and the conduct expected in the privacy of one’s home, and in one’s interpersonal relationships.

The playing field has been evened in such a way that accountability is nuancing the corporate conversation, so good rapport doesn’t just make things stress-free, but makes them able to be initiated in the first place.