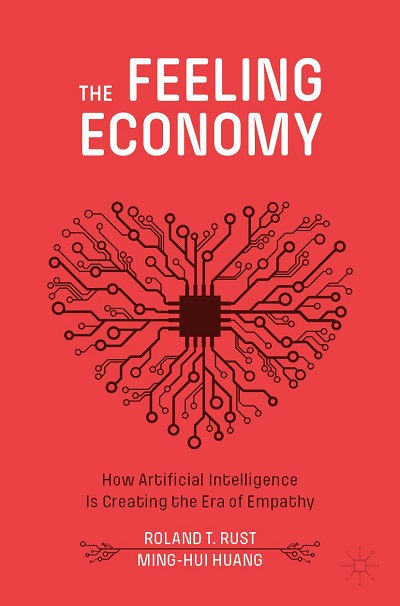 Roland Rust and Ming-Hui Huang obviously tailored their book The Feeling Economy: How Artificial Intelligence is Creating the Era of Empathy for professionals, particularly those in a leadership or decision-making capacity, but its appeal extends past these limited borders. Rust and Huang, perhaps unwittingly, crafted a social document with this book that, while timely now, will stand for years as evidence for its progressive point of view on a subject too often the purview of science fiction tropes and overheated imaginations.

The weakness of books such as this is they ask readers to accept much on faith and evidence. The jury remains out about whether artificial intelligence will lead to an upswell in empathy instead of robbing us of that quality. Huang and Rust, however, convincingly argue that AI will enrich our perception of each other’s challenges and needs rather than further hemming in our humanity. Despite this inherent weakness in works of this type, the co-authors succeed in depicting a world not far removed from the realm of possibility.

The book isn’t lengthy and the writers layer The Feeling Economy with a bevy of research and information. There are few sentences, let alone paragraphs, not packed with some sort of data or insight strengthening or further developing the book’s ideas. Rust and Huang do an five-star job of interlacing the research with a relaxed yet authoritative prose style The collaboration between these two experienced educators comes off in a seamless way; readers will be hard-pressed to identify where the contributions of one writer ends and another begins.

The visual material they add to the book never threatens to overwhelm the text. They are simplistic in presentation and help reinforce points made throughout the text. It is very much in keeping with the academic backgrounds both individuals share. Huang and Rust serve the University of Maryland’s Center for Excellence in Service as Executive Director and a Distinguished Research Fellow respectively. They occupy several other important academic positions and never treat their presentation here with anything less than rigorous intelligence.

It is an enlightening book. I am not among the work’s target audience, but I enjoy a smart exploration of pertinent issues and few are more so than the growing influence of artificial intelligence over modern society. There are many books available predicting it’s the future trajectory of its development, but few possess the credibility of The Feeling Economy: How Artificial Intelligence is Creating the Era of Empathy.

Ming-Hui Huang and Roland Rust have contributed a meaningful work for our times and a wide swath of readers will find something worthwhile in its pages. It is a quick read while dealing with an impressive scope of issues and demands to be consumed from beginning to end rather than piecemeal, but you will be able to return to its pages often to glean more insights. It will command attention for many years to come before sliding into irrelevance and I fully expect the co-authors will continue making their voices heard over the years to come.