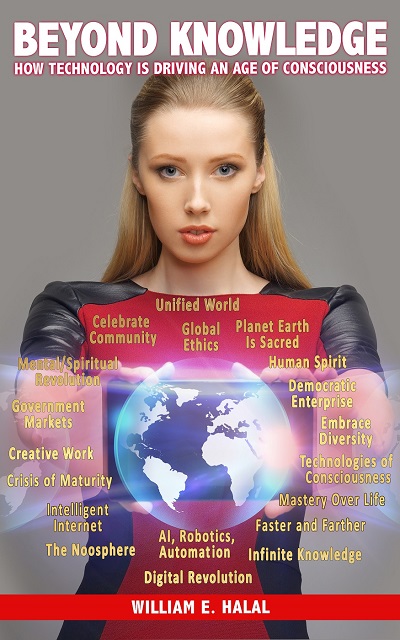 “Consciousness is such a common part of life – like breathing air – that it is taken for granted. But with the Information Revolution, the study of consciousness has exploded into a central debate of our time. I am not a neuroscientist, although I am a seasoned scholar in the social sciences, knowledge and intelligence. As we will see soon, it’s possible to integrate current understanding to reach useful conclusions.”

So begins the unique literary experience that is William E. Halal’s Beyond Knowledge: How Technology is Driving an Age of Consciousness, equal parts philosophical inquiry, equal parts scientifically backed hypothetical survey of where we’ve been, and where we’re headed. Halal writes in unpretentious, clear prose – making both the complex and opaque concepts, as well as the more transient, potentially apocryphal interpretations of a so-called ‘spiritual revolution’ against theological establishment and thought wholly comprehensible. Like the first two words of the title, Beyond Knowledge, suggest, the book steps beyond the currently trending marriage of holism and modern workplace management.

It’s more than just informed theory and preexistent knowledge driving Halal’s inquiries and statements. It’s his willingness to embrace the potentially controversial, but in a manner that is wholly informed and devoid of anti-intellectual sentimentality adding to the already intriguing focal points and literary approach. “Not too long ago, we relied on telephones and newspapers to communicate,” Halal begins. “We now use two billion personal computers (PCs), 14 billion cell phones and laptops, and two billion TVs. The information flows through 30 million Internet servers, 3,500 space satellites and almost one million miles of undersea cables.

This planetary layer of digital connections knits eight billion people into a living overlay of thought – the noosphere…Extensive studies confirm that attitudes, beliefs and values are shaped by a variety of well-known biases, allegiance to political parties and other extraneous factors. Even hard-nosed businesspeople admit that bias in decision making is a major problem. Demagogues use self-serving fantasies to blind people to reality and mobilize them into violence. It seems that objectivity is a thin veneer shielding base impulses as well as noble motives.”

What Halal talks about feels like something worthy of being in a realist, science fiction novel. It conjures up images of a world akin to William Gibson’s Neuromancer or Pattern Recognition, the Wachowski siblings’ Cloud Atlas cinematic adaptation and initial Matrix trilogy, or the underrated 90s sci-fi thriller Gattaca written and directed by Andrew Niccol. The trouble is, the landscape(s) media and literary entertainment like that evoke are happening now. Halal approaches a consistently shifting, evolving, and philosophically amorphous world with a sense of wit and enthusiasm.

Whereas the tonality of many books in the category Beyond Knowledge rests in feel slightly pessimistic and cautionary, Halal embraces the potential the increasingly digitized landscape offers across a wide variety of spectrums. It’s a welcome change to formula, and one that only further bolsters and supports the specificity of his arguments.