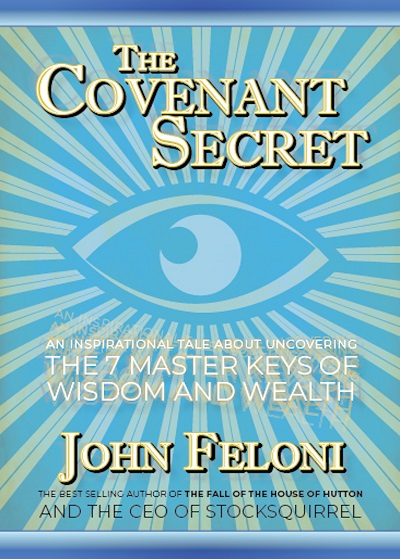 John Feloni’s new book is The Covenant Secret: The 7 Master Keys to Wisdom and Wealth. The book, as its title would suggest, is an effective mixture of fiction and actual, leadership advice. Feloni doesn’t mess around with clearly communicating the data and left-brain aspects of the read, but he’s able to seamlessly weave it into a genuinely compelling, original story. It’s not an easy thing to pull off, but Feloni manages to do so with mostly successful results. Take, for instance, the following excerpt: “‘In business, Bill, you know as well as I do, that sometimes what people do makes it easy to feel negative thoughts toward them.

The danger of such thoughts going unchecked is that if we allow them to take root, the result is returned bad behavior. Then we start treating people in the same negative way, and a toxic environment gets firmly established.’…Tom then recounted (to Bill) a true story that made his point of the power of Covenant relationships with employees. ‘In 1978, two of Ross Perot’s employees were taken as political prisoners in Iran. Perot put together a group of volunteers to break into the heavily guarded Iranian prison to free them and bring them home.

Everyone told Mr. Perot he was crazy. It was an impossible proposition. He couldn’t just march into a foreign country with some mercenary team and storm a prison. Who did he think he was? His answer is summarized in what he told Henry Kissinger, “These are my men. I sent them there, and I have to get them back!” And he did!’…To give Bill more to think about, Tom added, ‘It’s the Covenant Secret that bound Ross Perot to his people.’”

It’s this kind of entwining of the actual advice angle with the book’s overall narrative approach making things click. The thing I found myself singularly impressed by as a reader is how, despite a few rough patches here and there to be expected, Feloni makes this seem effortless. It never feels shoehorned in, or like one part of the book suffers because of the other. I haven’t seen that before in projects of this nature. Often educational reads masquerading as fiction can feel forced, inorganic, just flat-out wrong. But Feloni makes it all work, and frankly that feels like a miracle. And independent of that, it makes the learning aspect of The Covenant Secret actually feel fun. Especially earnest passages such as the following don’t come across as cloying, or overtly maudlin. They actually feel gratifying.

“Bill knew he had passion for his business and his vision, but he was upset that he had cared little—if at all—about what his people cared about, he never took the time to know them. He figured that if his company failed, then all the caring in the world wouldn’t matter,” Feloni writes in this vein. “He took comfort in the fact that as long as the company succeeded and people had jobs, he would bear the burden of being considered a bad guy. Bill realized that this was wrong thinking. It was not an (either/or proposition). He could treat people right and still have his company succeed. Actually, it was more than that. He was realizing that Laura and Tom were right — it would not succeed without his treating people right. He committed to changing his ways. He would be a leader!”