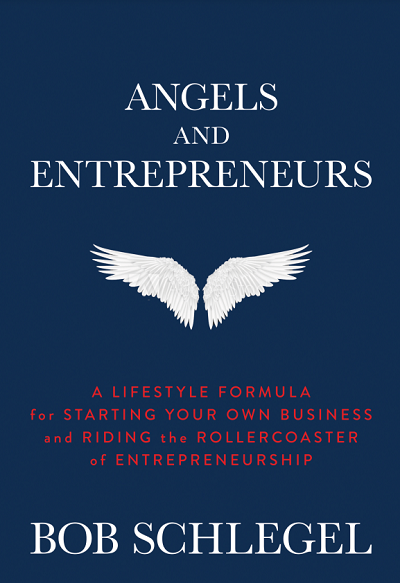 Bob Schlegel’s new book is titled Angels and Entrepreneurs: A Lifestyle Formula for Starting Your Own Business and Riding the Rollercoaster of Entrepreneurship. As the title and subtitle would suggest, the book extensively covers Schlegel’s keen observational insight on building up one’s potential enterprise with his specific brand of corporate philosophy and methodologies. Schlegel doesn’t throw any varnish on the text, instead opting for full transparency and a sometimes painful, personal honesty. “The stereotypical depiction of entrepreneurs is that they are risk-takers who are comfortable taking on substantial debt. There is certainly truth in that portrayal.

After I’ve proven my concept worked and I have a successful business model, I’ve taken on tens of millions in personal debt to build businesses worth hundreds of millions. I will admit, however, that I’ve made mistakes in taking on too much debt, bringing in partners, and personally guaranteeing loans. I want to spare you the pain that results from making the same mistake when financing your business or businesses,” Schlegel writes in a chapter titled Financing Your Dream Business. “…Because of the relationships I had developed with my company’s managers and employees, not one of them left me during the tough times. For most of them, it would have been easier to take positions with other companies when the future of our company was unknown. The fact that they stayed with me is something I will always appreciate. That was a very tough time for me. We had to do some downsizing, and I am always more interested in growing than shrinking a business.”

It’s this constant balancing act Schlegel promotes that I find so interesting. For every piece of shrewd business advice that he gives, Schlegel is the first to juxtapose it with the personal components proving pragmatically so vital. Calculated empathy is a phrase I would use to describe the split screen mentality Mr. Schlegel promotes. Surrender one or the other, and you’ll find yourself a feather in the wind. The cold warrior mentality media and news have promoted about the business world, particularly reminiscent of the 80s boom or overall, Reagan era cultural politics, is merely one aspect of maintaining a long-term, successful, and fluidly working hierarchal business structure. Paraphrasing the current president, “all (work) is local, all (work) is personal.”

“The entrepreneur survives through favorable transactions, making more than what is spent, hopefully! As a numbers guy, I can get swept up in the metrics of performance; key performance indicators like sales revenue cash flow net monthly recurring revenues, and similar measures found on spreadsheets,” Schlegel writes. “…(but) we try to leave a legacy that is not so much about the quality of the transactions in our lives, but the quality of our relationships. How we lived each and every day, and the good values that we lived by. Did we look for the best in others rather than the worst? Did we treat every person as someone with inherent worth, talents, and knowledge to share?”