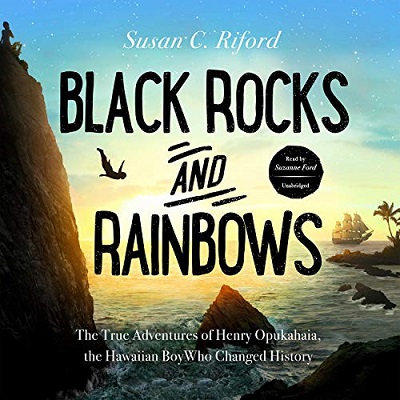 Suzanne Ford and Susan C. Riford’s book Black Rocks and Rainbows; The True Adventures of Henry Opukahaia, the Hawaiian Boy Who Changed History is a brief and rollicking reading experience. The best co-authored books boast several qualities but one of the strongest is when the final results possess the sort of seamlessness you find here. It is impossible to tell where Ford’s contributions end and Riford’s begin. The book maintains a consistency of style from its first page to its last.

The authors waste little time ushering readers into the book’s action. Black Rocks and Rainbows resists lengthy descriptions in favor of brushstrokes and has a narrative driven storytelling engine that carries you along at a steady clip. Despite the book’s amped up energy, you never experience the feeling Ford and Riford are glossing over significant details. We move from one obstacle to the next at a tempo that fully realizes the book’s dramatic potential.

The characterizations are on point. Ford and Riford create convincing exchanges between various figures that advance the plot. Even secondary characters are functional rather than ornamental or otherwise devices moving the story along. One minor flaw with the book’s characterizations, however, lies with the dialogue. The writers have a clear desire to faithfully render Hawaiian society and yet the conversations between the characters read like they are ripped out of modern American culture sans slang or other tropes. Black Rocks and Rainbows might have reached an even higher level of verisimilitude if they traveled an extra mile with the dialogue.

Conversely, some may quibble with the book’s frequent incorporation of Hawaiian culture. The authors wisely anticipate reader unfamiliarity with many terms and include a short glossary at the end. There are many moods pervading this book, but it is an upbeat work overall and has broad based appeal for readers. You can envision old and young alike enjoying this story for its pure entertainment value but coming away, as well, with the lasting substance of another culture depicted in vivid detail.

There are flashes of the authors’ exerting too much muscle when they should relax. There’s a taste of adjectives some will find heavy-handed, but Riford and Ford avoid saddling the work with many examples of this. They stick out but never damage the book. It is likely to hold up under repeated readings as well, a rare blessing from modern writing, but the natural storytelling skills both writers possess craft a compulsively readable text.

Black Rocks and Rainbows brings its Hawaiian locale to life without ever belaboring cliched observations. It is not a history lecture in book form but interested readers will finish feeling like they have an understanding of the exotic island world they did not before. This is a fun read you can complete in a couple of nights or less. Suzanne Ford and Susan C. Riford deserve credit and critical notice for concocting an action-packed historical narrative lacking nearly all pretense and satisfying the greatest requirement of all – it keeps us wanting to turn the pages. You cannot ask for anything more than that.