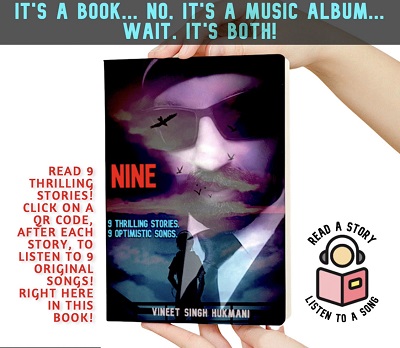 Nine is the first short story collection from Indian born singer/songwriter and now author Vineet Singh Hukmani. The stories, including its title entry, derive their inspiration from the nine successful singles Vineet has released over the last year without ever slavishly adhering to each song. I believe Vineet has a dual purpose in mind for these stories; yes, they are inextricably tied to the songs inspiring their composition. However, Vineet intends for these stories to stand alone, as well, independent of the songs.

He succeeds. The title story kicks off the collection with a yarn featuring ample suspense, credible characters, and a spirited pace that will appeal to many readers. Vineet’s writing is raw, it doesn’t have quite the same level of polish we hear in his music, but it’s my opinion as well that this is totally due to his comparative lack of familiarity with the form. He’s much more used to the demands of songwriting rather than prose.

His sense of craftsmanship remains intact, however. Readers will notice recurring themes uniting the stories, some stated outright, others inferred. Each of the nine stories has an optimistic demeanor despite whatever struggles they depict, a conscious aim, but it never feels like Vineet is attempting to force “false” endings on the stories. His outcomes are believable and satisfying instead of strained and/or absurd.

Vineet grounds his stories in the modern world. His characters must contend with the ever present effect technology has on their lives and several of the plots dive into outright fantasy or science fiction. What gives a special quality to stories such as “Dreaming Out Loud”, “Hurry”, and “I Pray”, among others, is their vigorous mix of the everyday and fantastical.

The line-by-line writing of each story shares the same vigor. Vineet keeps the paragraphs short, the stories are condensed to their essence, and the dialogue has plenty of snap. Moreover, it’s functional and rarely ornamental. Exchanges between characters during each of the book’s nine stories either advance the storyline or else reveal character.

The title story, “Dreaming Out Loud”, “I Pray”, and “Jab the World” are particular high points for me. The last of those stories, “Jab the World”, charges forward with even more of an inspired mood than the others as Vineet seems genuinely taken with its concept. His characters, especially the main ones, are immensely likable despite whatever flaws he may saddle them with.  “Dreaming Out Loud” is especially notable for its suspense.

Truly compelling fiction should possess a sense of stakes. Readers demand scenarios placing them square in the action as soon as possible rather than involved set-ups and the short story, in its optimum form, works at a high level when there’s palpable urgency behind it. It is obvious reading the stories in Nine that Vineet has only just now embarked on this leg of his journey and the potential is boundless. There’s something for everyone in these stories. The same accessibility defining Vineet’s music and allowing him to score 9 number 1 Euro Chart hits during the last year opens these tales up for readers of every stripe. Let’s hope this isn’t an one-off and we read new fiction from him soon.